I've been doing some more stuff with Koikatsu as well as doing thing to up-convert Conception Maiden from GMS1 to GMS2(Game Maker Studio 2, this is an engine used to create games).  Here are some character design stuff I did in Koikatsu since the last post(though I am still learning how to use everything): 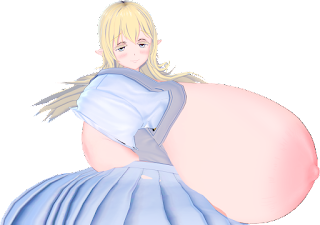 I updated Victoria's body proportions some more as well as changed her face.  Her facial expression is now a bit kinder and more relaxed looking(and maybe a bit sleazy).

Orc girls have been adjust too, to hopefully look a bit more fearsome. 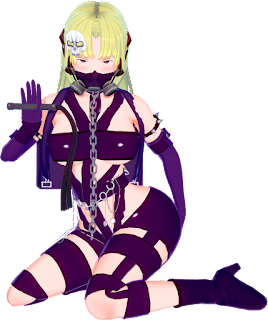 This character(WIP) may appear in the game, a human girl who was once a slaver trader/breeder that deceived human males, capture them, and sold them them monster girls.  In regions that were taken over by monster girls, she would force human women to get pregnant.  This is what she use to do before the apocalyptic war. 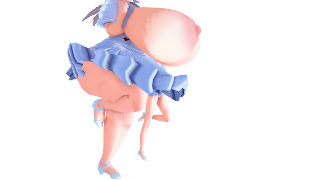 Something else I've been doing was trying to add animations.  Koikatsu has a very detailed scene creator(and fan-made plugins enhance this even more).  I can now take any animation created with MikuMikuDance and import it so that I can use it for my characters.  I tried importing the MMD files(called VMDs) I had already did for Lorelei and Victoria, and animated them both which worked well, and then saved their animations as an image sequence to test frames exporting.

A problem I had for a long time with images/sprites was shrinking/resizing them to be the best quality they could be.  From all the art programs I've tried, it seems Microsoft Paint(MSpaint) does the best image shrinking for the images I use.  However, I don't know any normal way to batch shrink images with it and it doesn't seem to support image transparency.  To get around this, I made 3 scripts that work together by combining microsoft paint with photoshop, however process this is very slow, needs preparation and can have bugs once in awhile.

Recently though, I've found a significantly better way to batch shrink images in what appears to be the same as microsoft paint does.  Using a program called magick I can now automatically shrink them like microsoft paint does.  This saves a tremendous amount of time and completely the solves a long-time problem I had with shrinking images while keeping a higher quality.  Here is an example of the animation playing, shrunk with photoshop, then shrunk mspaint style with magick:

It might be hard to notice at first, but the MSpaint resized one(using magick) has cleaner edges as well as more visible/less blurry details.  So I plan to use this to resize sprites  from now on.

Also I've up-converted Conception Maiden from GMS1 to GMS2.  From what I can tell so far, GMS2 runs notably better and GMS2 has a built-in autotile feature(using this you could create maps similar to how you create maps in rpg maker, in GMS1 this could be very difficult to do).  GMS2 is quite a bit different from GMS1 though, and also there were a few fatal compatibility bugs from up-converting the game.  However, I got the game running now in GMS2(with dialog, movement and the battle system all working) so hopefully I will have everything else fully working soon.

I removed the custom autotile system(so a lot of the tiles aren't joined in the screenshot above) I made, so the game should probably have little to no lag when switch maps(before the game had long loads between certain maps because the game had to wait until it manually merged all the tiles).  I will try to add GMS2's autotiling into the game instead.  So overall, the game will likely have far better performance than the last conception maiden demo(From what I can tell so far, there seems to be no lag/freezing on my computer).

Anyways, right now, the plan for Conception Maiden is to apply GMS2 autotiling into the game, make/update maps/storyline, add new character sprites/bust images/animations into the game after creating them in Koikatsu, and debug the game.

I'm not sure when a new demo for Conception Maiden will be ready right now since there is alot to do for it, but I'm planning to release demo 5 of Immoral Sorceress sometime next month.