Hi everyone,
A new Broken Hymn release is finally out, it is now on Patreon as early access for patrons of alpha/beta level.
Here is the information about the release date:


You can also find more information about v0.1.5 release here, and if you would like to know more about Broken Hymn in general, I've post a bit more about it here and here.

That's all for now,
see you all later.
Posted by pizzacat at 8:15 AM 2 comments:

Hi everyone,
The next version of Broken Hymn is almost ready.  This update will focus on the battle system but there is a number of other things too.  Including the following:

Here's an example of how the redone outside region near Reulan Keep looks like now without lighting/effects(Around the royal garden). 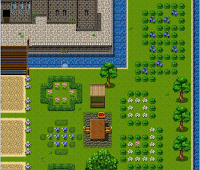 Shouko can now block attacks with her sword by holding the A key.  She will block attacks coming from the direction she's facing. 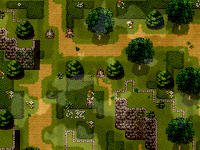 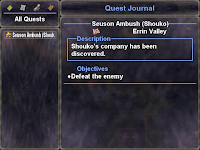 The game now has an auto-save features, this means that the game can now automatically save at certain points in the reserved autosave slots.  The save/load menus will now also show screenshots taken the time each savefile was saved.  These are saved as png files and named the same way the savefile is. 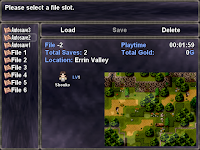 There are alot of other stuff too, I will be keeping a changelog for this game where I'll try to note the changes in the game from now on.  Here's a list of the main changes for the next version of the game:
Most everything listed above has already been implemented, but a few things I'm still trying to adjust in the game like the auto-save feature and the tutorial.  Once everything is finished, I will post the new version of the game. ^^  So the new version of Broken Hymn will be released by or before the end of this month.

Also, if you like to support me and my development of h-content such as this, please consider becoming my patron on patreon.

Hi everyone,
While GxL was in development, I did a number of polls just for fun on this blog(these polls didn't effect the game like the patreon polls).  So I thought you'll might like to see some of the results just for fun.

I also did 3 different favorite character polls at different points in the game's development: 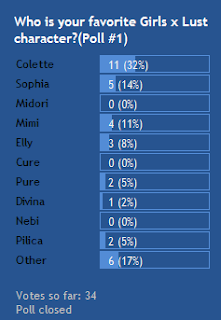 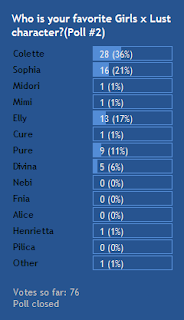 Poll done around the completion of gxl:

For all 3 of the polls, Colette ended up the winner of each of them, with 2nd and 3rd place varying between each poll.  If we only look at the most recent poll, the 2nd place winner be Divina and the 3rd place winner would be Sophia.  Thanks for voting everyone!

Also Broken Hymn's next update is on the way,
that's all for now,
see you later.
Posted by pizzacat at 11:19 PM No comments:

Hi everyone,
Desires Of Persephone - First Chapter is now live on patreon.  Originally I didn't plan to release this game at all, but I thought alot of people might like it.
For now this will only be on patreon as a special way to thank all my patreon for their support, but I will eventually post the game here on my blog as well.  Sorry if this is a bit disappointing. 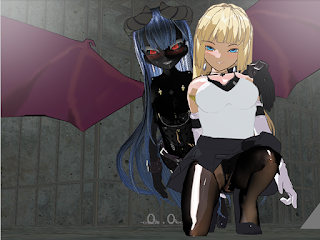 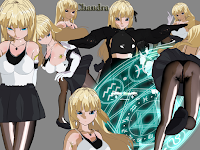 Also, I am now developing more broken hymn(as well as an untitled non-rpg maker game) and a new demo of that will likely be my next release.

Posted by pizzacat at 9:30 AM No comments: