Hi guys,
Sorry I meant to post this much much sooner but I'm back now(also, this post maybe rather long). ^^;


First, about the zooming, I decided to use a 2-level zoom-in with both the 40% and 60% sprites since I both sizes seem kind rather nice for the game and the largest shows so much more details(I've also made a small program to help make resizing the sprites easier), so that means the game should be able to zoom-in at the current zoom-in level(40% sprites) and zoom-in once more(60% sprites) instead of just once like the current demo.  Also there will be an option to disable the second level zoom-in for older pcs so the game would only use the 40% sprites(which should require less memory).
Once I think that I think I've redone enough of the sprites for the larger zoom size I'll add the second level zoom into the game(so it probably won't be in the next demo...).
Hope the things I just said isn't too confusing.  ^^;

Though maybe not nearly as much as it should have by now, the game has made progress.  The game now has a working complex inventory system with items that have a more properties and can level up.  If you're curious, each item can now have all of the following:
name, description, image, type, effect, perversion, level, max level, next level, sell price and buy price.
Each party member also have more individual values as too(over 30 total..).
This will also require the save files to change a little bit, though I'm not sure if this will break the compatibility with older save files yet or not...

I've also been doing more with the platforming, here's some examples below(Warning, possible spoilers below)(click on image for full-size): 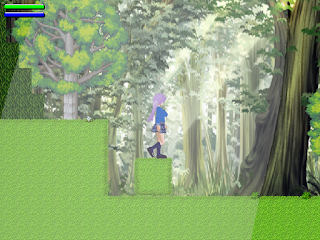 The Coddlers(like all Shimaians) will lust for males, but they don't want to harm the males.  When they see one they will try to make the male lose his weapon, and they will use their umbras to defend against attacks and use it make the male drowsy, afterwards, if it's there's no other enemies around they will take off his armor/clothes and force the male to have sex with them(they may also just immediately pounce on the male if he's unarmed).  After they have sex, someone in the party can leave to carry the male back to Shimai or they can leave the male there on the ground for the moment(but sleepiness will wear off at some point), O-dobi will  also be able to interrupt/stop them(um, I'll likely go into more detail about this on another post): 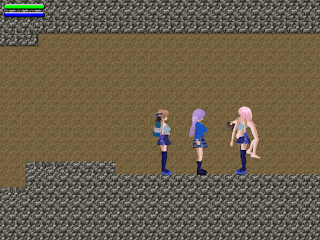 also for platforming I've added things to O-dobi like crouching and climbing abilities, so O-dobi can climb things like vines and ladders now ^^ : 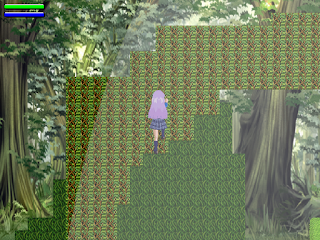 They're will also be a secret area in the game featuring some platforming that will be more difficult than normal.  You will get something special if you manage to make it to the top: 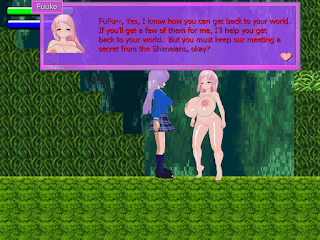 I've also started a world map, so there will also be different places in the game aside from Shimai, here's what the world map looks like so far: 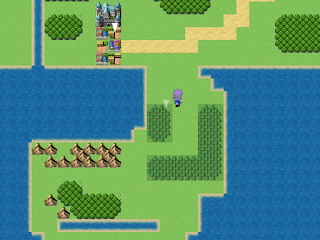 O-dobi also has an alternate outfit now which I already have animated in the game(though it probably won't be seen in the next demo): 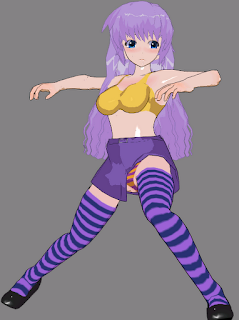 I've also done things like the inside of a few houses, though the sprites I used have to be stretched alot, so I may try to use completely different sprites/tiles if I can find any.  (though I'm not sure right now if you'll be able to go inside houses in the next demo just yet..^^; ) 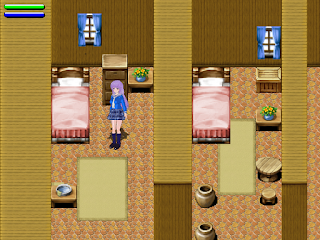 Um, as for the battle system stuff I'll probably go into more detail about that later.
Also I now have just about everything I need to do a wider variety of fetishes as well as birthing scenes.
Aside with what I said in my earlier posts I also plan on adding:
- sound separated into 3 categories(so you can set the volumes of each): voices, sound effects, and music.
- game CGs images which will be pictures taken by the Shimaians that you can get.