If you can, please vote there and let me know what you think.

Thanks guys,
see you later.
Posted by pizzacat at 7:15 AM 3 comments:

Hi guys,
This is just a quick update.
The download link is updated with the following changes:

- "out of memory" error and crash seen on pc such as ones that have integrated graphic cards is fixed, special thanks to redplauge for help with debug testing.
- Overall game performance improved.
- ESC no long exits ingame.
- Bug fixed causing game error when pressing "X" key on exploration mode(since Demo 1a).
- New fixed version is now called "Demo 1b".

That's all for now,
see you later.
Posted by pizzacat at 6:16 AM No comments:

Hi everyone,
The first main demo of a game I've been making since last year is finally here and can be downloaded below. 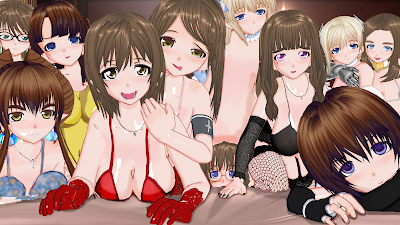 A boy name Minori is awoken from cold sleep(cryostasis) by a mother and her daughter, only to find that a deadly virus wiped out most of humanity, and that the 3 of them are the last living humans on earth (with the exception of an unknown number of other people in cold-sleep pods).  The world is also overrunned by "cross-breeds", deadly parasitic life-forms.  With just the 3 of them left, humanity faces complete extinction.

In order to prevent extinction, Minori must(to his dismay) have sex with the mother and daughter, and impregnate them.  Using special technology, pregnancies can be accelerated to full-term, and birthed babies' age can be accelerated to maturity.  Then Minori will be forced to impregnate his female offsprings through sex as well.  Interestingly, all his offspring are female.  Unfortunately for Minori, these girls love sex and want to rebuild the world into his own personal sex-paradise harem.  Through this, Minori can increase the human population and use the girls' help to hopefully reach more cold sleep pods before it's too late, as well as take back land from the cross-breeds.
-------------------------

The game's characters were made with 3DCG and was animated in different ways using mikumiku dance, photoshop, and a "figure" animation system I wrote from scratch.  Not just that, I also wrote the game engine from scratch using GM studio.  Note though, that is game is still in early development and the engine has only recently become stable.  However, there is alot of content, so please give the demo a try!

Here are a few screenshots of the new demo:

If you would like to support the development of games like this, please consider becoming my patreon here.

On-screen messages can be progressed by pressing Enter, Space, or Left-Mouse Button.(Hold down to fast-scroll text)

Some notes about the current demo:
-This new demo contains the game intro with 1 major h-scene and 2 different battles.
-The enemies currently do not attack you in battle mode.
-Weapons are to be added to battle mode
-Lorelei's personality/look will be revised for the next demo
-I've spent alot of time debugging so hopefully there aren't any major bugs

Hi guys,
Sorry for the long absence.
For about 2 months, I wasn't really able to work on the harem game because of limited free-time, so i started using what was left of my free-time to slowly make a map editor with game maker that can edit maps(rooms) in a similar way to rpg maker(like directly copy multiple tiles and paste them, do autotiles, paint fill effect, easier to navigate between tilesets, etc.).  This editor makes it far faster and easier to create/edit maps on game maker(can edit any game project's maps).  I was hoping to use this on the harem game.  The map editor isn't complete, but it is functional and I have recently used it to create two different maps in the harem game.  I will probably post a video of the map editor on youtube sometime in the future.

After that I had more free time again and went back to making the harem game.  Though a great deal of this time was used debugging new bugs and difficult to replicate bugs(like animation bugs based on time, which only occurs when joints line up a certain way), as well as adding new features that I realized I needed in the game(the last i added was sound playing that could be triggered by the message box and by joints on any points of an animations).

I have hopefully fixed all the bugs(biggest bugs were joint animation sync bugs and command map bugs that made the characters unable to move/move incorrectly), and I spend over a week recently doing nothing but additional bug checking(which was mostly just trying to fix 3 big bugs), so the game is now stable enough for demo release.  The storyline and eventing of the game is also all in order now.

Since this is the first main demo, I will be posting it publicly at the same time I post it on patreon.  I will be posting the game demo here and elsewhere sometime today or tomorrow.  I hope you guys will look forward to it(I will also reveal the official name of the game then).

That's all for now,
see you soon.