Hi everyone,
Hopefully the following won't be too confusing.  I thought I would talk a little more about the battle system in development in Conception Maiden.
The battles for the game is divided into two different parts, the Overmap(top-down view where the characters can me moved one by one like a tactical game), and the Clashmap(side-view real-time battle more like a platformer-fighter).

When you walk up next to an enemy on the overmap, they'll be an option to battle them which takes you to the clashmap. 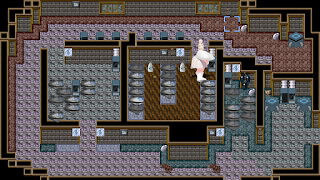 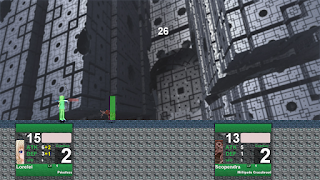 having a "clash battle" on a clashmap, this is controlled directly with the keyboard and is more like a real-time platformer-fighter.  The +2 and +1 on Loreiel's stats represent the bonus she gets from initializing the clash battle.


When on the clashmap, you have direct control over the character with the keyboard, you can stand, run, attack, jump, and block.  The AI will now also try to attack you.


Something particularly new that I had met to add before is the fatigue system(this was partly added earlier but never fully applied until now).  At the very beginning, each character will start with 2 stamina points, for each action you take, you'll lose 1 stamina point(unless you wait without moving/doing anything).  If the character has less than 0 stamina points, they are considered fatigued and will suffer from reduced stats(the more fatigued the character is, the higher the effect).  A character will also lose 1 stamina point each time they are attacked on the overmap by an enemy. Characters will regain 2 stamina points at the beginning of the player's turn on the overmap(this is enough stamina to do an action, and get attacked once by an enemy).

This is met to hopefully make the game much more strategic.  Before this, one character could walk up to a group 5 enemies and beat them pretty easily(all you have to do is avoid getting hit on the Clashmaps).  However now, if a character walks up to a group of 5 enemies, this could be fatal for that character.  Here's an example:

You might be wondering, how do you avoid tiring the character out?  Attacking groups of enemies with groups of your own characters is a tactic that can be used to completely avoid the heavy stamina lost.  For example: if there were a group of 3 enemies, Lorelei could attack one, Victoria could attack one, and someone else on your team can attack the 3rd enemy.  If these enemies are defeated right away, none of characters will get fatigued since they all fought the group of enemies together.

This system also makes it important to never let a character surrounded by enemies on all sides.  Not only that, this system applies both ways, meaning fatigue also applies to enemy.  A group of your characters can surround one stronger enemy and fatigue her by having each character attack her. This will lead to her having reduce stats from the fatigue and make her easier to defeat.  However, this strategy might only work if a single enemy is by his/herself.

Aside from this, there also something new called the initializer bonus.  Whichever character initialized the clash will be given about a 20% attack and defense bonus, making them more likely to win/survive the clash(see the clashmap image above).  This means both the player and enemy can receive this bonus by initializing the clash battle.  This also means it can benefit the player to try to attack as much as possible during their turn. 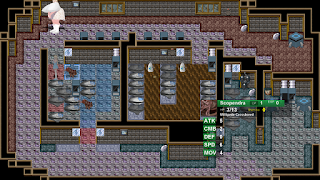 This shows how stamina looks right now on the overmap, the stamina of the enemy is now 0.  It was reduced to 1 when the enemy moved closer(but not close enough to attack), then to 0 after Lorelei attacked the enemy.


This fatigue system and bonuses were made to hopefully help balance the real-time fighting with the turn based strategy, making both important for victory.

I still don't have a release date for the demo, but I will let you guys know once it ready,