Hi everyone,
This is just a quick update, IS demo 3 on the way, however things have being going much slower than planned so it looks like I will still need a bit more time.  Part of the reason for this is a small features I spent days trying to add to the battle system(relating to character deaths), as well as limited free time.  The main things left to make before the demo is ready is rest of the village domination portion, the summoning of the succubus, an execution scene(if I have time to add this), and spelling/grammar checks.

However, the demo is at a point where I can make an official release date now, I will be releasing immoral sorceress demo 3 on October 16th, 2019.  Sorry for the long delay on demo 3.


Here's one final preview screenshot before it's release: 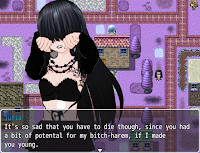