Hi everyone,
This is the same poll for the last post but I thought I would make post for it to make it easier to see. 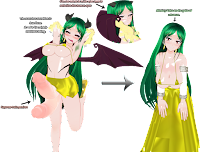 
I don't want to spoil too much, but her name is Secretiona(like "Secretion" + "a").  She is a seductive, highly lascivious being.  She notably has a vagina along with two supreme penises and can use mana to make light reflect off of her usually sinister-looking eyes.  She can use Mimicry to take on the guise of a human(her penises are hidden under a long skirt, she can also make her penises briefly disappear).  She has used her supreme mimicry skills to seduce the pants off of countless men.

Succubi are known to be the most powerful demons, and they assisted a certain human in the creation of "demon poison"(a beyond powerful item for corrupting lifeforms), as well as items based off this demon poison such as the "seed of minor corruption".  Unparalleled growing hatred for succubi by followers of the goddess led to succubi being intentional summoned and massacred by the holy.

Um, that's about all for now,
but here are some sprites of Secretiona.
See you all later.