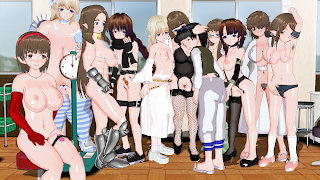 
Click Here for a 2nd image showing the girls lined-up

My next new game will be based on a game idea I've had for a very, very long time that I've always really wanted to do but never really had the idea developed before now.

I do not have an official name for this game just yet, but think of the term "Harem Generations" for a hint about the game content.  To be more specific(without really going into the storyline), you start with 2 girls(a mother and daughter) and you must impregnate them to increase the population and avoid extinction(build a harem), the babies they give birth to are put into an age acceleration machine that can accelerate the baby's age to maturity.  Then you must have sex with your offspring too, repeating the cycle for they sake of humanity.

This will be a High-Quality game using a powerful general game engine I've built with gamemaker over this year, and If everything goes as plan, this game will be a post-apocalyptic harem-building game with gameplay (tentative) mainly being turn-based strategy + real-time fighting + dating sim hybrid(with emphasis on strategy during battle).
This game is still in the concept phase mostly(I am making a test build now too though), so somethings may change, but I will reveal much more to you guys about this game in the near future.  I hope you guys will look forward to it. ^^

Also if you would like to support the development of game such as this, which takes a great deal of time and work, please consider supporting me on my patreon.

Lastly, I was wondering what you guys think of Broken Hymn and Desires of Persephone now, so I made a poll.  Please let me know what you guys think in the poll and/or as a comment down below(also feel free to comment about my new harem game). You can vote on the poll here: http://www.strawpoll.me/14464106