Hi everyone,
This is just a quick update, the new version of broken hymn is slowly getting closer and closer to completion and is set for release sometime this month.


In case anyone's curious, here's another preview screenshot(in debug, lighting will probably look different from this in the next version): 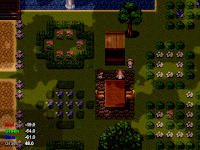 I've done many things to the game since last version, but more recently, one thing in particular I did aside from storyline was write a script to help make debugging and editing the lighting setting easier.  This allows me to test maps with different preset lightnings and to manually adjust lighting easily.  I also noticed that on some computer monitors the keep's interior appears too dark, so the keep's lighting will be more subtle on the next version.

Another one of the major sprites I redid was Princess Mina's, I've done many variations for her appearance, but here's what the starting one looks like now:

That's all for now,
see you all later.
Posted by pizzacat at 9:04 AM