For the new Alpha of GxL, I've been trying to make a gallery system based around RPG maker's menu system.  The gallery system would basically allow you to view any sex scene of your choosing that you've found previously in the game from a gallery menu. 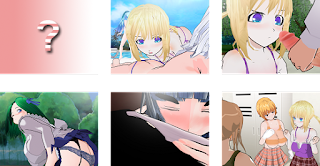 For the next release, Girls x Lust Alpha 0.06 is planned to be release sometime between the middle and late part of this month.

That's all for now,
see you later.
Posted by pizzacat at 5:47 AM