A little about Broken Hymn's world

Hi everyone,
This is all basically stuff you'll eventually find out as you play the game.  I'm not sure how interesting this will be before you actually play it in the game, so i'll try to keep it simple(and this won't go into too much detail).   This is just to clear up the story a little bit for those who are confused and want to know now.  If you don't want to spoil any of the game, please do not read this. 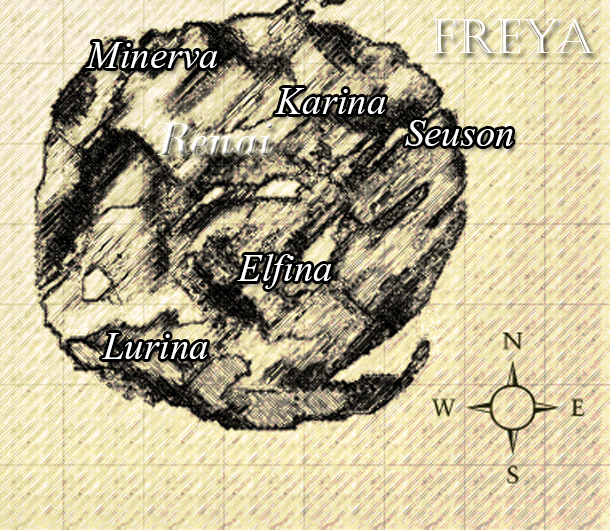 On the continent of Renai there are 5 kingdoms, so far the game has focused on Minerva and Seuson.

Minerva - Minerva is a kingdom ruled currently by Princess Mina, the childhood friend of Prince Lean, along with the sickly Queen of Minerva.  Minerva fought in a war known as the battleline war, near the end of the war Karina joined Minerva to assist them.  But by then Minerva lost nearly all of their military and their King to the war.  Minerva now has only a few hundred soldiers.

Karina - Karina is a kingdom ruled by the king and the princess.  The former mercenary Shouko gained the support of the princess after saving the kings life from an assassination.  Karina joined the battleline war near the end after being attacked by pirates from the country Elma.  After the war ends Karina continues fighting up north leaving little to defend their kingdom.  After disturbing news, Shouko leads her band of former mercenaries on a mission to the kingdom of Seuson.  However Shouko get no support from the king of Karina, only very limited support from the princess of Karina.

Elfina - Elfina is a kingdom once ruled by the kind King Foy, along with Prince Enn and Prince Lean.  As the oldest Prince Enn was inhered the Kingdom of Elfina, while Prince Lean was to move to Minerva and marry Princess Mina since the Elfina Queen could no longer have children.  Not to long after discovering a gigantic gold mine on the land of Elfina, the Kingdom of Seuson desires their wealth and starts a war with them.  The Seuson-Elfina war leads to the death of both king of Seuson and the king of Elfina.  Prince Enn goes off to war but what happened to him is unknown.  After the capital of Elfina is attacked, Prince Lean, the younger brother of Enn, flees to Minerva where Princess Mina rules.

Seuson - Seuson is a kingdom ruled by a queen and a princess.  Seuson and Elfina always had an unstable relationship and after Seuson learns about the gold discovered in Elfina they decide to go to war.  The king of Seuson dies in the Seuson-Elfina war, however Seuson does not lose this war.  Out of the 5 kingdoms Seuson has the most powerful military and they are not known for kindness.


This game is something like a dark fantasy, but it's focus isn't kings or kingdoms, it's a dark game and will include a wide variety of sexual fetishes, once the 2nd chapter begins, I think you guys will understand the way this game is alot more.
Um, that's all for now
See you later.
Posted by pizzacat at 1:00 AM