Recently I posted an updated version of the sakurahime demo, but there is alot to be said about this game so I though I would post some more info about it here:
As I said before, for main type of gameplay, it will be top-down rpg/side-scrolling platformer, basically I'm thinking something like an rpg with Tales of Symphonia type battles(but battles are very based on sexual actions), platforming, and also very free-roaming but with a main story. Adventures of Garnet also inspired me in ways for this game. Ideally, I want a huge town with 100's of unique looking girls and lot of events.

THE WORLD
The game takes places in 2 different worlds, this one and theirs. There are 4(or 5 maybe) major countries in their world, one of which in particular is named Shimai(which means "Sisters").
It is a country full of girls(known as Shimaians).

The girls there are very nice people who don't want to harm anyone, but at the same time they are also extreme perverts with desires for sex that normal humans couldn't handle. On average, each girl is 5 times stronger than a human. They also never really get old and have a far longer life span than a human.
A few of the girls(the lucky ones) own a male as property or even a male harem. 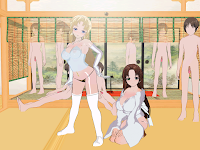 The girls enjoy being naked all the time over wearing clothes, so only the nobles and other special people bother to wear clothing.
They enjoy having sex with each other, even in public, and especially with males. They dream of having a male harem and usually have perverted things on their mind.

The Shimaians "try" not to harm their males. They value their males but even more so they tend to value sex very highly and occasionally "break"(meaning literally rape to death) one.
Punishment for "breaking" a male is usually having to wear a chastity belt for a day.

Important to note that they only give birth to females, so they have to take males from our world. (and the way to get to this world is through a portal, but they rarely appear and appears in different places each time when they do.).
Males are less than 10% of their population and the girls always desire more(the girls can have sex with males all day, but of course the males can't handle that.)

Shiami is ruled by Princess Uetto and she can usually be seen with her male harem and sometimes her best friend, the priestess.

THE STORY
In this world, there is a girl named O-dobi. She is kind of tough, hates guy and perverts(though she's not a lesbian), and overprotective of her best friend Mimi.
She also has best friend named Alice. She is shocked when a very tall girl, with angle-like wings and a tail, and wearing only a skirt appears in her school from a something that looks like a portal.....
(That's all of the storyline I'll reveal for now, but basically O-dobi ends up getting stuck in the other world.)