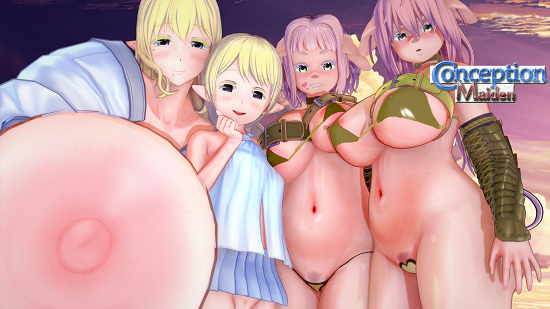 Conception Maiden demo 3 is here(public release) and can be downloaded below. This has some major changes to the game(basically like a rebuild with new story, CGs, changes to battle system and eventing and other foundations) and is quite different from demos 1&2.  This is the biggest release of this year.

Here's the new story of the game:

About 2 of every monster girl breed was saved from an unprecedented war that obliterated the humans, monster girls and goddesses.  Placed into unbreakable egg-like sleeping pods, the monster girls slumber.

Some time later, due to an unknown stimuli, 8 previously unbreakable egg-like pods crack open, one of which containing you.

This is a femdom/harem/pregnancy game where the idea is you're (being forced to) impregnating monster girls as the only conscious male in the world to save their clans, while also attempting to befriend other monster girl breeds as you meet them.

If you would like to support me and the development of games like this, please consider becoming my patron on patreon or subscribestar.

I've made a new favorite character poll for demo 3, click here if you would like to vote or see the results: https://www.strawpoll.me/42362133

Some notes about the current demo:

-some of the animations still need adjustments
-there are a number of placeholders in the menus
-in this demo, if you lose on a battle map, it will be consider it a win since it's still wip and continue the story

Um, that's about all for now,
but here are some demo 3 screenshots/images (after the jump, click on this post's title)-----v

Here are some screenshots/images of the game: