Hi everyone,
The Conception Maiden: Utrila mini-demo is now on patreon.
For this, the main character of the game was kidnapped by a Utrila Cross-breed.  This cross-breed seeks to violate him and fill his body with her eggs. 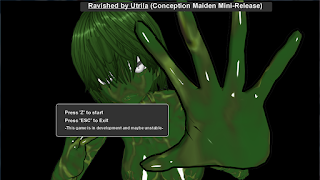 Here are the Patreon Mini-demo Release dates: Very early access: December 25th, Early access: January 4th.
This mini-demo will most likely not be release publicly(since it's only a small part of the game), but everything in this mini-demo will be include in the next main demo I release which I will also post publicly here.  I am hoping to release the next main demo sometime in the not too distance future.


If you're curious, you can see my original post about conception maiden here: http://www.pizzacatmx.com/2018/08/conception-maiden-reveal-demo-download.html

That's all for now,
see you guys later.
Posted by pizzacat at 2:07 AM