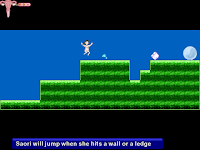 Hi everyone,
It's been awhile since I posted, but since late last month I've had more time and made alot of progress on AmaiSei.  The demo is just about ready now.  The official demo will have about 16 stages, here are a list of features the demo will have:

New graphic assets created
Stages now have tiles placed
Auto-Save/Load system added to save game data
Record Replays system has new features, now has a menu where you can save/load replays
Saori can now give birth to 7 different monsters(about 4 will be in demo)
Advanced world map system added that lets you select stages and unlock new ones
Text system has been enhanced and additional internal game text now store externally
New objects added to puzzles


and here's a list of overview features listed on an earlier post:
Puzzle-Solving/Platforming
storyline intro
Lots of handmade sprites(and some backgrounds, all made from scratch)
autotiling system(tiles are joined automatically in a way similar to rpg maker)
powerful eventing system(making it very easy to make events)
custom collision system
Saori will attempt to follow your orders
ability to walk and jump
ability to carry certain items
Saori now has a birth cycle
ability to climb platforms(with climber's bracelet)
ability to have sex and give birth to monsters(animation speed now changes as she has sex and birth fluid is released while birthing)
text/message box system
game text is stored externally(now in a style similar to ren'py's, text system was rewritten twice).


Here's the release dates for the demo:
Edit: Please click here for the updated dates