Hi guys, been a bit busy lately but i've also been making progress with the game.  I was having some collsions bugs earlier but in what might be called a "break-through" I finally figured out how to get platform collisions perfect by using something called masks(which I figured out while playing a certain platformer.).  This fixes it to the point that I can say the for sure that the next version will have platforming in it. ^^
I also noticed that the sprites could be even better quality when I shrink them, resulting in an even better quailty O-dobi than the current version(though I may not be that easy to tell....). 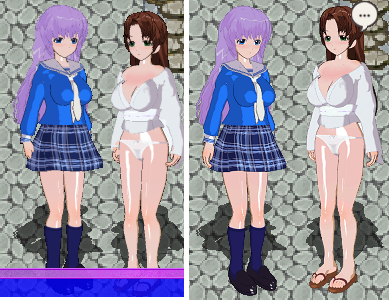 To make them look better, I render the models in higher quailty on my desktop, then I basically used paint to shrink the sprites(paint for windows 7 resized the sprites really well, even better than photoshop CS3 it seems) but then I also have edit around the edges of each sprite to remove a thick grayscale(as in sligthly different gray colors) boarder that paint creates(basically the gray background color fuses with the edges of the character's sprite when shrinked).  Paint doesn't have a transparent color option and photoshop creates semi-transparency around the edges when you shrink an image, so I'm not sure how to get around this if there is a way to(anyone have a suggestion?)...
However, I may likely try to do this with all the girls, but doing this requires extra editing on each sprite(which could take awhile for over 100 girls), so for now I've just redone the major characters and I'll probably be doing the game at this quailty from now on.
In other news, I re-did the walk animation and added a run animation, but this time looking very closely at real walking/running animations(this took abit longer than I though but it pretty well).  So now O-dobi can walk as well as run. ^^ 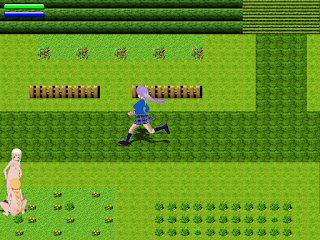 Here's 2 updated lists of things I'm thinking about for the game:


Things that might(eventually) be in the game:
-  destroyable/leveling up inventory items
- a very light farming system
- fishing
- day/night system(not sure about this yet but I like the passage of time idea)
- weather system
- external sprite loading to improve speed